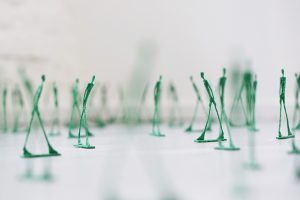 Still Walking is an installation made of multiple plastic figures reminiscent to a series of sculptures from Alberto Giacometti produced in a toy factory in Huizhou, China. While the figures in appearance still resemble his ‘Walking Man’, they differ completely in their own “history” in respect to the process of production they went through. Giacometti’s work has thus been transposed from the realm of the artist as creator with his powerful form-giving craftsmanship to the most advanced, fully technological and automatic mode of production; from the individual to the faceless multiplicity; and finally from Old-Europe to one of the new centers of the world, China. What returns in this new context of mass-production are zombies, still walking, but as de-individualized, automatized shadows of a non-finite past haunting the present. The sculpture here is transformed into an ambiguous sign, hieroglyphic symbol or Emoji. (Text by Angelika Seppi)