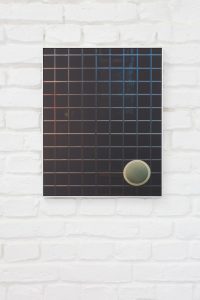 In the photographic series GRIDS, the focus is on the grid in its physical form as a metaphor for the often intangible, invisible structures of the digital world. Since the discovery of perspective in the Renaissance, the grid has been expanding its reach as method for ruling space and representing data. Today it embodies the logic of the digital binary that influences our perception of reality, truth and meaning. It is a ‘Gestell’ (Heidegger), an ‘Enframing’ that lies behind modern technology, one that “sets upon man, challenges him forth, to reveal the real, in the mode of ordering, a standing-reserve.” The grid is omnipresent yet often goes unnoticed. Linear, functional, optimal, mirrored in zeroes and ones; filters, algorithms – the mechanisms of the grid operate all around us. When the grid manifests in real physical structures, there is hardly ever the optimal and more often error and decay. The present work looks at industrial material in public space that shows this im/perfection where information is both concealed and revealed. The ordinary becomes a poetic means to recalibrate, to question how the digital and physical relate to each other and co-exist in a multitude of worlds all visible-invisible.

This site uses cookies to improve your experience. By using this wbsite you agree to the usage of cookies. Find out more.